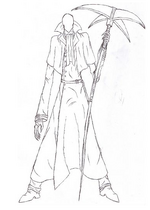 Cabadath, better known as The Arrogant Man or The Prince by the Order of Blessed Agonies, and initially referred to as The Tall Man in Trilby's Notes, is Chzo's highest servant and one of the main antagonists in the second half of the Chzo Mythos.

As implied by his initial name, Cabadath is absurdly tall, towering over Trilby who himself is described as six feet (in The Expedition, he is approximated to be eight feet tall), and very thin; despite this, he is disproportionally strong and fast, described as moving "like a tarantula, advancing with painful slowness before attacking faster than (I) could blink." He is dressed in a long black tight-fitting high-collared coat with blood-soaked bandaged hands, tails that reach to the floor, concealing his feet, and buttoned up practically all the way. A large piece of white fabric covers his front and ends at approximately the pectorals, with a red bowtie and stretching to his neck... See More 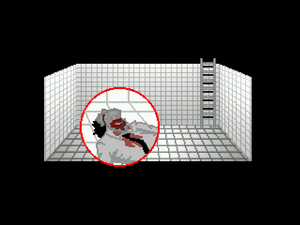 AJ's remains, as seen in 5 Days A Stranger

Community content is available under CC-BY-SA unless otherwise noted.
Advertisement